Spending the last few days mostly in National Parks didn’t give us much opportunity to get some groceries. There are small stores, but they are just way more expensive then Coles or Woolworths. So just before we crossed the border to South Australia we came across some big stores and decided to do our grocery shopping there. Happy to have fresh food again we headed west. It didn’t take long until the first quarantine warning sign appeared at the side of the street and we realized that we just made a big mistake. We knew that you are not allowed to take some foods and plants across state borders in order to prevent the spread of fruit flies. Somehow, we just forgot about it though! We didn’t know if there would be some kind of control or not, but there was not much that we could have done about it (driving back was too far), so we just kept on driving. We weren’t checked and all went fine. Still, we had a bad feeling though. We didn’t want to be the stupid tourists who spread some disease over South Australia. The camping ground we picked for the night was literally right across the border on the other side of the river. So, we figured, as long as we eat what you are not supposed to bring before we continue our drive, it wouldn’t harm anyone.  So, we chopped up our fruits to make “Bircher Muesli” for breakfast and had vegetable Fajtas for dinner. Problem solved! 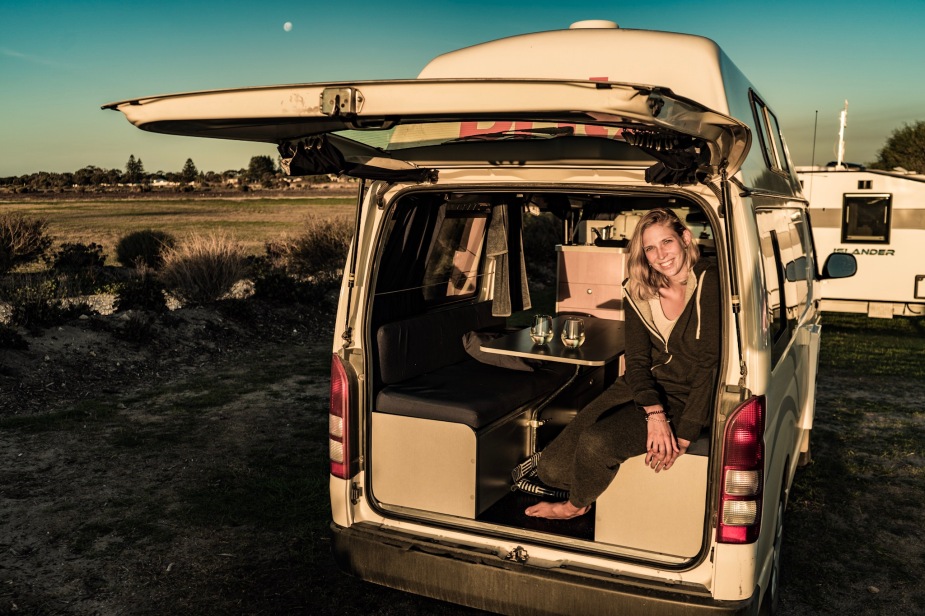 The next day we continued our drive and stayed overnight in Kingston. There are more beautiful beaches around this area, we didn’t really spend time there though. If it is not even 20 degrees and windy, we found that there is not much to do at beaches. Still, we had a really nice drive along the coast, which we ended the next day in Adelaide.

We made it up to Adelaide by noon which was perfect. After lunch, we had the whole afternoon to explore the city. Adelaide’s city center is surrounded by a huge park circle. We thought that was really clever. Like this there is always some green space in walking distance! The camping ground we picked, was just outside this park, what made it easy for us to walk to the center. We came across the amazing university campus and I instantly felt like I would have enjoyed studying there. What? You don’t pick your University by the kind of student life you might have there? Too bad for you. Just 5 minutes further we reached the busy shopping street. It was a walking zone only, what we enjoyed a lot. There were also heaps of artist playing music, dancing or doing magic. At a small beer garden, right at the shopping street we had a drink and enjoyed watching the street. At the very end of Rundle Street, we found some nice little restaurants and pubs and decided to have dinner in one of them. To us, Adelaide still had the charm of a small town and felt very relaxed. The next day we didn’t feel like spending more time in the city and headed to the Barossa Valley. On our way out of town I realized, that we missed going to the Sundays market, which is supposed to be really nice. I still cannot believe that I just forgot about that! Well, sometimes you are lucky to discover new things if you are not planning your trip and sometimes you also miss out on things.

When visiting the Barossa Valley there are heaps of wineries to choose from. As we knew some wines from Two Hands already, we decided to head there first. Also, friends of us recommended their cellar door. Two Hands is one of the few that charges you for tasting their wine, but in our opinion, it was totally worth it to pay a little something. Not only we got an amazing experience sitting on the terrace having our own expert guiding us through the tasting menu, we also didn’t feel like we had to buy something. Plus: we each got a wine glass to take home. JJust a five minutes drive from Two Hands there is the little village Greenock where we found a really cheap campsite. Within the village there about three or four wineries, all in walking distance. This is a really important point, as you wouldn’t want to spit all that good wine you are tasting out again. And it goes without saying that driving and drinking just does not belong together. So, after we installed our van at the campsite, we wandered off to one cellar door Ballycroft Vineyards, a very small cellar door that was recommended to us by Two Hands. Jo, the owner, produces 5 wines by now. We got to taste all of them and thought they were absolutely amazing. Also, we had a great time chatting with him and ended up joining him on a beer at the local brewery after he closed the cellar door. We met some friends of his and had a really nice evening. They recommended to have dinner at the local pub and get the beef schnitzel there. BEEF Schnitzel! Have you ever heard of that! We certainly haven’t. It basically is a breadcrumbed deep fried porterhouse steak served with the sauce of your choice. Toby absolutely loved it and insisted to have it again the next day. I didn’t mind either as it was an absolute bargain too. JThe next day we took a drive through the Barossa Valley where we got some great views. We were really surprised though that all the vineyards looked that dry. The vines we know from Switzerland are usually green, red or yellow, depending on the time of year or don’t have leaves at all when it is winter, obviously. The vines in South Australia had brownish leaves and didn’t look healthy to us. But apparently, they are and can cope perfectly well with the dry climate they have. We also visited some other cellar doors that day and got to try some lovely wines.

The next day, we decided that we did enough wine tasting and should continue our journey. For a while, we were thinking about heading down to Port Lincoln before we started the drive to the desert, but then decided that we had seen enough beaches for the moment. So, with a stop in Port Augusta we went up to Coober Pedy. Big parts of this opal mining town is built undergrown in order to escape the heat. In summer, it can get over 50 degrees out there! When we were there, it was just over 30, which was still ok. The underground museum we went in to, was nice and cool though. Being built inside the natural stone it is always comfortable 25 degrees in those buildings. Pretty amazing, isn’t it? It was really interesting to see that town, so definitely worth a stay if your passing by anyway. Especially, if you consider, that there won’t be more to see for the next 8 hours driving.